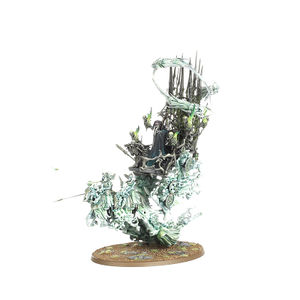 A miniature of a Mortis Engine under the control of a Corpsemaster.

Corpsemasters are sinister, deathless cloaked figures that can be found controlling engines in armies of Death.[1b]

In Deadwalkers armies they control Corpse Carts, using Goad or Lash to strike their enemies and, in some cases impale the souls of their foes with Cryptswords.[1a]

In Deathmages armies they control the Mortis Engines responsible for opening the triple-locked reliquary to unleash the a wave of necromantic force within. They defend themselves with their Mortis Staff.[1b]