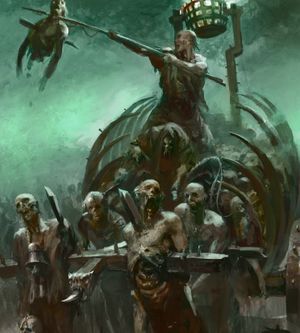 A Corpse Cart with an Balefire Brazier.

Corpse Carts are the most vile creations of the Deathmages found amongst Deadwalker armies. It is a wagon made by rotted wood, rusted metal and diseased flesh filled with mutilated corpses and writhing body parts. These are driven by macabre shrouded figures, known as Corpsemasters, and hauled by shambling zombies.[1b][1c][2]

The Corpsemasters themselves are armed with either a wicked Goad or a cruel Lash, and some may even carry a Cryptsword that can impale the soul of their victims. The shambling zombies that drag the cart defend themselves with Rusty Blades.[1a][1b][1c]

On the back of a Corpse Cart they can be equipped with either an Unholy Lodestone or a Balefire brazier[1a]: