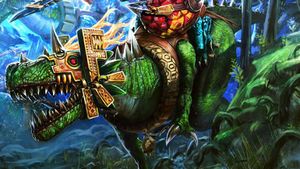 Cold Ones are one of the many reptilian creatures used by the Seraphon in their wars against the Great Enemy.[1a]

The Cold Ones are large, bipedal reptilian creatures that live in the Ziggurat-Ships of the Seraphon, as well as the jungles that surround their Temple-Cities.[1a][1b]

Cold Ones are bred as the mounts of the Saurus Knights. They are known for being fierce, territorial creatures whose cunning makes them incredibly dangerous in battle.[1a]

Both Starborne and Coalesced Cold Ones tend to revert to their primal urges, attacking or devouring any Seraphon that draw too close to them. When a pack of wild Cold Ones wander into a Temple-City or the inhabited sections of a Ziggurat-Ship, they can cause untold devastation until they are corraled by cohorts of Saurus Knights.[1a]

Saurus Knights, who have a natural affinity with the beasts used by Seraphon, can rein in these temperamental creatures and under their guidance, Cold Ones become devastating assets to the Constellations.[1a]

The Seraphon believe that the Saurus Knights who ride the Cold Ones into battle are blessed by Itzl, the Father of Beasts, one of their many deific interpretations of the Old Ones that the Seraphon venerate.[1a]