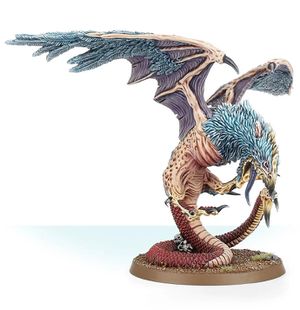 A miniature of a Cockatrice.

Cockatrices are flying Monsters of Chaos whose petrifying gaze can turn a man to a cursed statue. Unlike most other beasts of Chaos they are extremely reclusive and only emerge from their solitary hollows when they desire for fresh meat. They take wing following Beastherds into the lands of civilized races and stalk the outskirts of battles waiting for an opportunity to strike. When the time comes it lunges towards prey with a berserk frenzy, its eyes glowing with warping energy. Those who returns its stare are transfixed and petrified while those who avert their gaze are savagely attacked with sword-like talons and vicious beak, that can snap clean through armor and bone.. Their screams and the monster's screeching resonating in the minds of petrified victims. This makes them a particularly difficult opponent, even if they are not as physically impressive as other monsters, as one must fight it without ever glancing their eyes. After the battle ends the Cockatrice turns its attentions to the petrified prey, picking apart the powerless victims with its beak.[1][2][3][4]