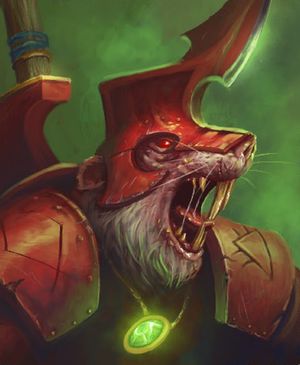 Clawlords are the brutal leaders of Clans Verminus. They fight with merciless and underhanded savagery, seizing upon the slightest advantages that may offer victory, much like how they rose to their positions. While They are swaggering and arrogant they also share their race's instinct for self-preservation and will not think twice about stooping to any depths in order to murder their foes while remaining alive. They will use devious tactics such as blowing Warpstone dust into an enemy's eyes to blind them, hurling a hapless lackey into their foe's path or drop a massive stalactite on their opponent to gain victory. They will often lead from the back, in a nice safe place where they can watch the battle, so they can strike where they are needed most. When cornered these backstabbing commanders fight with frantic, unbridled ferocity to protect their lives.[1b][3]

The status of a Clawlord is not earned by merely working towards but is seized in a bloody instant. Some may arrange unfortunate accidents to fall on their rivals while the less-subtle Skaven may call out their rivals and defeat them in bloody one-on-one combat and then devouring their corpses in front of their horrified underlings. But the real challenge is hold on to the position after gaining it. A skilled Clawlord must be manipulative enough to set rivals against each other and keep the loyalty of their underlings while usurpers are ruthlessly eliminated. In order to reduce detractors the Clawlords must constantly gain victories and new conquests making them extremely aggressive and willing to spend as many lives of underlings as they must to gain new trophies. [1b]

The most ostentations of these warlords ride into battle on the back of the Brood Horrors created in the breeding pits of the Clans Moulder. Not only are these monstrosities capable of regenerating as quickly as they are wounded, the sight of their Clawlord riding on top of such imposing mounts makes its followers less likely to betray them.[2a]

Clawlords can be armed with a great range of weapons, like the dreaded Warpforged Blades, a pair of Barbed Blades that allows them to attack in a flurry of rusted steel or a War Halberd paired with a Barbed Blade. They wear heavy armour for protection and some carry Clanshields to defend themselves with.[2b][2c][3]