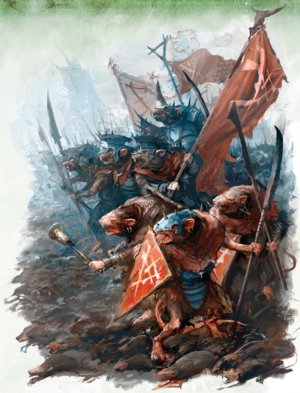 Clanrats are the main front-line units that form the bulk of the forces of Verminus clans and only the worker dregs and slaves outnumber them in the Under-Empire. Individually they are poor warriors that are ill-disciplined, cowardly and prone to infighting, however when they gather in large numbers they become dangerously fast and vicious.[1][3]

They are led by Clawleaders and supported by Bell-Ringers and Standard Bearers.[2a][2b][3]

In battle they charge as seething hordes, gaining courage from sheer numbers and attempting to overwhelm their enemies, biting, stabbing, screeching, squirting the musk of fear and trampling their own fallen beneath their bloody claws. This means the inevitable death for many Clanrats but for the Skaven this this means less rivals and better scavenging rights. This frantic exertion causes the hyperactive Skaven metabolism to send the Clanrats to a ravenous mania known as the Black hunger, a near-mindless state where Skaven must consume sufficient flesh or be gnawed away from within. Thus the fallen of both sides become meat for the Clanrats after the battle. [1][2a][2b][3]

Their weapons and armour are typically rusty and poorly maintained, like Rusty Spears, Rusty Blades and rickety and slipshod Clanshields, and are often often scavenged from the fallen or even their own comrades.[1][2a][2b][3]