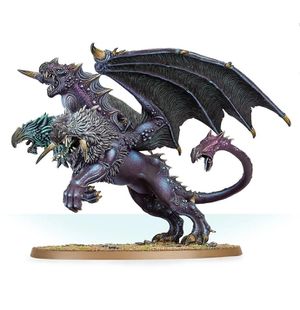 A miniature of a Chimera.

Chimeras are some of the most fearsome of the Monsters of Chaos all of them having a savage and unpredictable nature, from their bodies to their minds. A Chimera is a flying monster with a terrifying mix of monstrous parts bound together by the raw energies of Chaos which also grants them ferocity surpassing that of any natural creature. It's origins are so warped and from such varied sources, that it's impossible to pinpoint what exactly there were.[1][2][3]

The most striking feature is its three heads which are usually that of a dragon, a lion and a predatory bird. The draconic head is able to unleash scintillating flames, the the leonine head grips its enemies with its brutal incisors and thrashes its victims until their tattered bodies fall limp while the avian head puncture even the heaviest armour with its hooked beak. Each head is independent and are prone to violent disagreements but are capable of fighting independently yet terrifyingly in concert. On the end of their fiendish tails there is a mouth, while on their backs sprouts wings capable of giving it flight. Their claws are poisonous.[1][2][3]

There are also tales of Chimeras with ursine or crocodilian features, or the wings of a dragonfly, but the most disturbing is the infamous Beast of the Bhoer Peak whose three heads have the appearance of a human, an aelf and a duardin. [1][2][3]