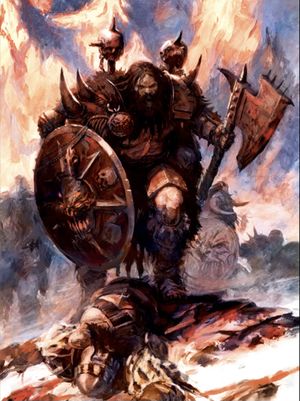 Chaos Marauders are the numerous tribal warriors dedicated to the worship of the Ruinous Powers. They come from lands suffused with the corrupting touch of Chaos, hardening them into deadly fighters. The Marauder tribes are made up of hundreds of thousands of warriors who are yet to devote themselves fully to the Dark Gods as a Chaos Warrior - either from lack of readiness or having not properly caught the attention of their fickle masters. [1]

This does not make them weak by any stretch of the imagination, however - their tribal communities may be sneered upon as primitive by Azyrite scholars, but life amongst the harsh wilds of the realms has shaped them into robust and strong people. A tribe itself can be made up from anything from a handful of warriors lead by a charismatic warleader to vast throngs of barbarians united by a Shaman or Darkoath Warlord. It is rare for a tribe to dedicate themselves to a singular god, often paying homage to a whole pantheon of deities reflecting Chaos' different aspects. Those who do so generally gather with like-minded warriors under a single champion, although this is considered to be an oddity - although amongst the Godtouched Warbands such zealots are the norm. [1]

When the Slaves to Darkness wage war upon the civilised lands, the Maruaders generally make up the vast majority of the horde's strength. It takes very little encouragement to convince them to join; should the tribe's oracles claim it to be the god's will, then they will march out en masse to the aid of whichever Overlord has seeked their aid. Often these battles will also be with fellow champions of the Ruinous Powers, clashing to prove the superiority of their gods and Overlord. Should the Warband meet defeat, those warriors with sufficient courage and skill are generally absorbed into the victor's horde, joining other like-minded warbands or warriors with similar temperament. [1]