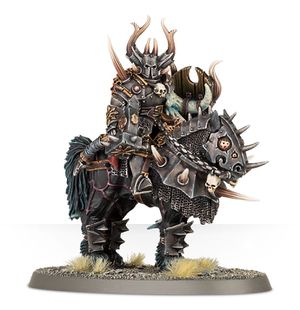 A miniature of a Chaos Lord mounted on a Daemonic Mount.

Chaos Lords are the masters and champions of the Slaves to Darkness Hordes, standing only a step away from eternal glory or eternal damnation. The knowledge that the eyes of the gods are upon them, gives them determination to prove their might to the dark gods. Most rise to rulership of their people by skill and strength and many hordes contain numerous exemplars favoured enough to be considered Chaos Lords that are in constant competition with their rivals to achieve the position of Godsworn Overlord, and the divine favour that accompanies it.[1]

In order to maintain their position in the eyes of the gods, Chaos Lords constantly perform great deeds, the dark rewards they have gained in their life ensures that a Chaos Lord is far stronger and swifter than a normal man while the hard-won experience has honed their skills to a razor edge. When challenged they will even stand in the path of a frenzied troggoth or duel with daemonic champions in return for power or knowledge, putting their very souls on the line.[1]

Chaos Lords may ride upon a variety of deadly mounts. Those who particularly impress the gods may find themselves bequeathed a daemonic mount. These may take any shape ranging from iron-scaled serpents to huge flame-snorting destriers. Such strong-willed and vicious beasts pose a constant threat to their master, but this is considered just one more challenge a Chaos Lord must overcome to prove their worth. [1]

Some prefer more natural but deadly creatures known as a Karkadraks, reptilian brutes with scales are as hard as rock that can be further bolstered by plates of hellforged iron while the its tearing horn could defeat any armour. Their rampages are known for being almost impossible to stop and only a Lord who can halt the creature’s deadly momentum can force the Karkadrak to submit to them. [1]

Even more ferocious is the Manticore, leonine creatures so thoroughly suffused with the power of Chaos that their only true point of commonality is sheer fury. Most Chaos Lords who attempt to dominate a Manticore end up being shredded to pieces but a rare few succeed in battling the creature to a standstill and proving themselves the apex predator.[1]

Chaos Lords wield cursed blades or wicked flails that contain the bound essence of daemons that rage at their confinement and attemp to slip free of their bounds but their destructive power means most Chaos Lords are willing to risk their wrath.[1]