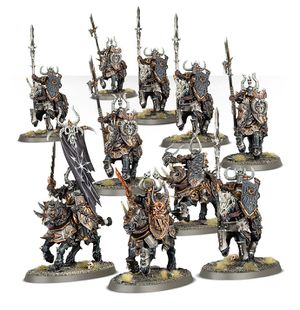 Chaos Knights are the elite cavalry of the Slaves to Darkness, many of which having walked the Path to Glory for many years.[1a]

Many consider themselves noble or chivalric in an infernal fashion but in reality they are nothing more than butchers and madmen consumed by their quest for glory. They are often extremely proudful and will only lower their banners for their Godsworn Overlord or Everchosen himself.[1a]

The champions of this unit is called a Doom Knights and are supported by Standard Bearers or Hornblowers.[1a][2b]

Chaos Knights are feared fell cavaliers clad in heavy armour that hide their bodies wracked by mutations and wielding ensorcelled weapons that can match even Sigmarite blades.[1a][2a]

The reputation of these terrifying champions of chaos and their iron-shod destriers inspires incredible dread in even in the bravest warriors and can lead them to flee.[2a][2b]

Chaos Knights ride upon War Steeds, corrupted dark chargers and hulking muscular beasts whose breath is like cinder. On the rare occasions when an entire knightly orders are corrupted their mounts are also remade alongside the warriors.[1a]

They are clad in armour that can be forged from Chamonite steel, corrupted ironoak, or even stranger materials that has twisted to become jagged and brutal. Most wield either an Ensorcelled Weapon, Cursed Lance or Cursed Glaives paired with Chaos Runeshield which have dark runes inscribed upon them to withstand even the most powerful of attacks. The ensorcelled polearms are capable of spitting several enemies with the point of the weapon.[1a][2b]

The Doom Knights is the champion of a unit and may carry a Cursed Flail instead of their normal weapons.[1a][2b]

Chaos Knights can have the following Marks of Chaos: