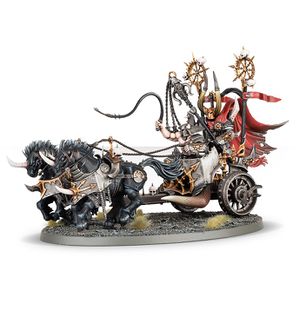 Chaos Chariots are brutal war engines used by the Slaves to Darkness, pulled by War Steeds or Gorebeasts.[1][2a]

The solid construction of a Chaos Chariot's frame renders it highly resilient, easily able to withstand the blows of the enemy as it wheels around. Unlike some armies that use chariots as steady platforms to fire projectiles, Chaos Chariots smash straight into and often through the enemy lines, crushing the foe beneath their bladed, grinding wheels and hooves of their sinister steeds. A single Chaos Chariot can completely destroy a shieldline.[1][2a][2b][3][4]

They are well suited for warfare upon the open vistas and plains of the realms, allowing a warrior to cross great distances at incredible speeds and using the mass of the chariot itself as a brutally effective weapon.[1][2b][3][4]

Most are pulled by corrupted, muscular destriers, crazed with fury pounding through their minds. They smash the foes they are lashed at with their roughshod hooves.[1][2a][2b][3][4]

Sometimes a tribe may capture a brutish creature known as a Gorebeast to pull one of their chariots. These scaly, hulking monstrosities can be found across the realms wherever the touch of Chaos lingers and possess monstrous strength. While bonding a Gorebeast is no easy feat, the natural inclination for destruction these creatures possess make them highly effective weapons. Once hitched to a chariot a Gorebeast will likely charge the first enemy that it sees, its sheer bulk and heavy fists wreaking untold havoc as the charioteer themselves simply tries to keep up with the monster's kill-count.[1][2d]

The charioteer that drives the Chariot uses a barbed Lashing Whip and are known to use it to stir their steeds into a frenzy and lashing at their foes with equal cruel glee. Those that survive the charge of Chariots are finished off by the hellforged weapons of the the second charioteer, like long-hafted Chaos Greatblades and Chaos War-flails. These Chariots often come in a group and are led by a skilled Exalted Charioteer with the experience of many years.[1][2a][2b][2c][2d][3][4]

Chaos Chariots and Gorebeast Chariots can have the following Marks of Chaos: