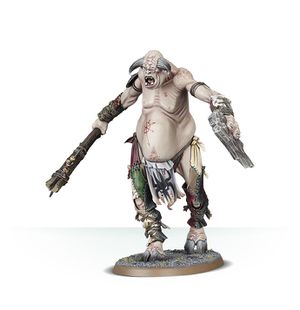 A miniature of a Chaos Gargant.

Chaos Gargants are lumbering, foul-tempered Gargants who have dedicated themselves to the Gods of Chaos.[1]

At the beginning of the Age of Chaos, many Gargant tribes either sought to flee from the invaders or join Sigmar's alliance to resist them. Others however were eventually corrupted mind and body by Chaos, descending into savagery and with their forms twisted in bestial fashion. Chaos Gargant tribes trample the lands and slaughter everything they can, caring nothing for each other and banding together only to increase their destructive powers.[2]

These creature go into war in a state of unthinking fury, with the leaders of Beastherds often wounding them intentionally to make them even more berserk. These gargants often go inebriated into battle, making them a threat to both foe and ally. They are also know to stuff hapless warrior into their bags to consume later. When a gargant dies his enormous body fall, smashing all underneath it with its bulk.[3]