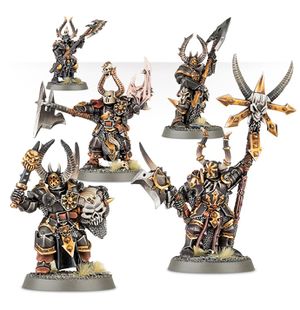 Chaos Chosen are Chaos Warriors who had survived many battles, pleased the gods and had their eyes set on them.[1] The Chosen are heavily armoured slaughterers who form the inner circle of a Chaos Lord.[2a][3][4]

While Chosen warbands are amongst the most deadly elements of a Horde they are often limited in number but many Despoiler Hordes contain considerable numbers of Chosen to better serve the ruling Daemon Prince's will.[1]

They are lead by Exalted Champions, warriors who are only a step away from having several warbands under their command the Chosen fearlessly enter battle against any foe, axes swinging in great crimson arcs as they howl praise to the watching gods.[1][2a]

They are supported by Skull Drummers and Icon Bearers.[2a]

Amongst the ranks of the devotees of Chaos, those who gain many dark rewards may become one of the Chaos Chosen.[2b]

Held in awe by fellow Slaves to Darkness, each Chosen stands as an exemplar amongst the armies of Chaos. This means that they take to the field wherever the fighting is thickest, inspiring other Slaves to Darkness through sheer violence they unleash upon the battlefield, fighting all the harder, each seeking to draw similar godly attention onto themselves.[1][2a][2b][3][4]

Chaos Chosen wield Chaos Greataxes and cursed Soul Splitter blades, heavy two-handed axes that can cleave a fully armoured warrior in twain and has the power to sever a foe's soul from their body. [1][2a][2b]

Chaos Chariots and Gorebeast Chariots can have the following Marks of Chaos: