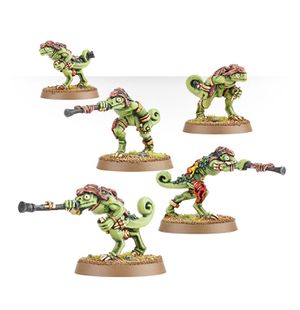 Chameleon Skink Hunter are assassins of the Seraphon armies. They have the ability to blend into surrounding environment at will, becoming invisible to all but the most skilled observers, using this ability to patiently and relentlessly track and, eventually, ambush their prey from the shadows.[1b][4]

They are armed with Celestite Blowpipes, also known as Dartpipes, that release darts coated in the enchanted star-venom of iridescent amphibians found within the Seraphon world-chambers. These darts are particularly effective against Daemons of Chaos who burst into celestial flames upon contact with the substance.[1a][1b][2][3a][4]

In close combat they can use Celestite Dagger or the envenomed darts to defend themselves.[1a][1b]