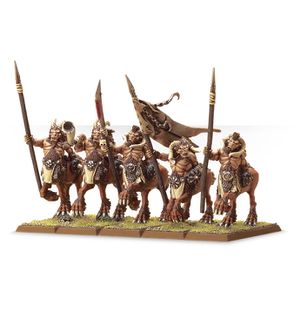 Centigor Warriors are Centigor infantry of the Brayherds. They go to the battlefield in herds, charging like savage mockeries of conventional cavalry. Their dangerous Clawed Forelimbs are also dangerous in close combat. Centigors often drink with reckless abandon, including in battle which enhances their performance.[1a][1b][2]

A unit is lead by a Gorehoof and supported by a Banner Bearer and a Brayhorn musician.[1a][1b]

These warriors go armed with crude Centigor Spears on one arm and Beastbuckler shields, used to deflect enemies' blows, on the other. They wear limited amounts of chainmail and cloth and decorations that displays the motifs of chaos as well as skulls. Their equipment adorned with straps and metal studs.[1a][1b]