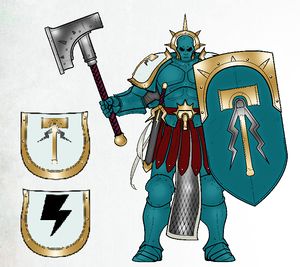 A Liberator of the Celestial Vindicators.

The Celestial Vindicators also known as the The Vengful, The Hate-Fuelled and The Hurricane of Blades are the sixth Stormhost of the Stormcast Eternals to be founded. They wear turquoise hued armor. Forged from heroes plucked from the most war-torn lands, they are fearless even against the might of a Bloodthirster. [1][2][9]

They carry a deep hatred for all things Chaos, making them stern and unforgiving and creating a deep bond with their brethren. This makes them vengeance incarnate, relentless in their pursuit for revenge against Chaos.[4a] The Celestial Vindicators know neither mercy nor restraint. They chant many grim war songs to better channel their fury against their foes.[9]

In the Realm of Metal the Celestial Vindicators try to reclaim the Silverway from the minions of Tzeentch.[3]

The Realmgate Wars saw them assault the Eldritch Fortress in the ruins of Elixia. [16a]

A Skaven Grey Seer, Kritch enlists Clan Shokryk to who create machines, storm-thing snatchers that can capture the souls of Stormcast Eternals. The first test is against a force of Vindicators commanded by Lord-Exorcist Esmodire is a total disaster and although one soul is briefly captured but it blows up the engine before returning to the Realm of Azyr and the skaven force is wiped out. [10a]

Celestial Vindicators seek to achieve a holy state of fury and there are fraternities within the Stormhost that that seek out hopeless conflicts so they may fall in battle to be reforged while inflicting as much damage on the enemy as possible as they believe the reforgings would bring them closer to their goal of becoming the perfect living weapon.[18a]

Their raw fury is said to create a palpable heat but it is commonly expressed by war-songs that have inspired many preachers of Vindicarum.[18a]

They worship not only the God-king Sigmar but also the Father of Blades, an entity created from the spirits of twelve rune swords from the ancient past. In honour of the Father, they often use swords rather than hammers that many Stormcast favour. [16a]

A Vindicator who is reforged must pass through the Sturmdrang Gate, a portal of black fire and only those with a powerful core of hatred survive. Those that do are gifted with a tiny amount of the simmering rage within the heart of Sigmar. [16a]

The Father of Blades may be the spirits of the Runefangs - twelve ancient magic swords forged by the legendary Dwarf Runesmith Alaric the Mad in the World-that-Was: Runefang