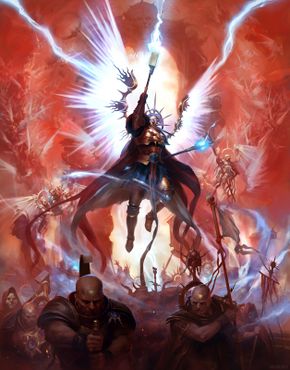 The Celestant-Prime also known as The wrath of the God-King, The Avenging Angel of Azyr, The Bearer of the World-Hammer and the The First Scion of Sigmar was once a great king and guardian of men, now he has been strengthened by a prodigious infusion of Sigmar’s divine might and wields the Skull Splitter, the Great Shatterer Ghal Maraz. All Lord-Commanders of the Stormcast Eternals answer to him and he answers to Sigmar himself.[2][3a]

The Celestant-Prime was a great king and a guardian of men in his mortal life and chosen by Sigmar to be the first Stormcast Eternal, to be an answer to the greatest champions of Chaos. Sigmar laboured long and hard at the arcane process employing many mysteries but at the completion of his work the warrior did not rise and simply lay inert. He understood that even the greatest warrior was incomplete without the appropriate weapon and during the sent his warriors to find and retrieve Ghal Maraz as soon as his tempest broke. After the Heldenhammer Crusade's success in recovering Ghal Maraz, Sigmar went to the Chamber Extremis within the Black Citadel and placed the warhammer in the hands of the Celestant-Prime. He awoke as thunderstorms raged and lightning wreathed around the Sigmarabulum.[1][3c]

After eleven failures at recovering the Black Chasm Bridge, Sigmar sent the Celestant-Prime which succeeded at clearing the way.[1]