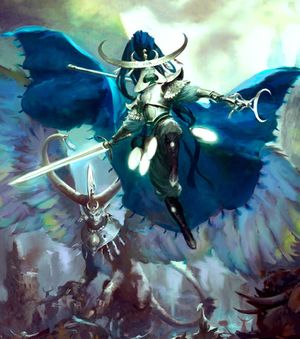 Celennar (Spirit) is the True Moon of the Realm of Hysh. Since the days of the Spirefall the Arch-Mage Teclis and Celennar are inseparably bonded to one another, linked by mutual trust and benefit, mirroring the relationship between the Lumineth Realm-lords and the geomantic spirits of their realm. [1][2a]

During the events of the Ocari Dara, the Spirefall, while Tyrion was rallying the Aelfs of Hysh, Teclis was deep in meditation. From the wilds of HaixiaH Teclis' mind traveled into the Aetheric Void outside the Mortal Realms and spoke directly to Celennar's mind. Both soon found the other to be a kindred Spirit, Celennars relation with the Realm of Light, mirroring the duality of the godly twins.[2a]

After a month of deep meditation and discussion, Teclis returned. This time accompanied by the physical form of Celennar, first of the Aelementors. Together the two assembled the most repentant and selfless of the Aelfs to teach them the secrets of bonding with the realm itself. Thus starting the time of the Reinvention.[2a]

While the duo of Teclis and Celennar is revered across all nations of the Lumineth, nowhere is Celennar as respected as in the lands of Zaitrec. Here, in their adopted homelands, the Aelfs often speak to Hysh's ethereal moons like speaking to a good friend. Many cities in this land claim one moon or the other as their patron, but none is as respected and sought after as the True Moon. Many Aelfs travel great lengths for a chance to gain some of the Lunasphinx wisdom. Those approaching the duo often spare Teclis little attention. "Better to learn from the source than from the mouthpiece" is a common sentiment among the Aelfs of Zaitrec, much to the irritation of the Arch-Mage.[2b]