From Age of Sigmar - Lexicanum
(Redirected from Celemnis)
Jump to: navigation, search 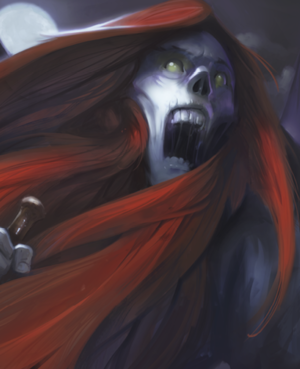 Celemnis (Quicksilver Dead), the Silver Maiden, once the Swordmaiden of the Argent Sisterhood is a Nighthaunt Tomb Banshee.[1]

A tall red-haired warrior-smith who lived and died in the Age of Chaos.[1a]

She was a daughter of a Ninemage.[1a]

Her armoury was on the west side of the Square of Living Blades, her swords famously crafted with a single strand of her crimson hair at its core. It was in the same square that her tormentor, Ephryx erected the statue that contained her corpse.[1b]

One of her teachers was none other than Grungni, the Great Maker. It was from that deific smith that she learned how to make the swords that she became renowned for.[4a]

In the Age of Chaos Celemins was a defender of Elixia, the Sculpted City in the Hanging Valleys of Anvrok. As the forces of Chaos besieged the city she tried to persuade the High Alderman of the city to return Ghal Maraz to Sigmar but failed to convince him. [1a]

As Chaos warriors entered the House of the Aldermen, she and several of her forge workers fought them, killing three of them with her silver blades. However they were quickly overwhelmed, her men slain and she was disarmed and taken captive by Ephryx of Denvrok. [1a]

The sorcerer tried to convince her to join him for fifty days – for the first twenty, every possible luxury and indulgence was offered her but she refused to countenance submitting to him. A further twenty days were spent in a cold dank cell with barely enough food and warmth to keep her alive. Lastly, when she refused him, Ephryx tortured her body and soul for another ten days. [1a]

Still, she would not join him and so he inflicted upon her a twisted death – he boiled her alive in silver and placed the resulting statue in the ruins of her city. As she died in agony, the Bell of Lamentation sounded in the half-constructed Sigmarabulum and even Sigmar himself wept. [1a]

Her vengeful ghost haunts the Shattered City to this day, and she helped the Stormcast Eternals during the Heldenhammer Crusade, finally gaining revenge on Ephryx.[2]

Vandus Hammerhand and Ionus Cryptborn had brought their Stormcast into the ruins of Elixia, reaching the Square of Living Blades where they were attacked by hundreds of tribespeople in the service of Chaos. As the battle raged, Celemnis awoke and sang her beautiful and terrible song of rage and terror, summoning not only other Nighthaunts but also animated silver swords that attacked both sides. [1b]

Ionus pleaded with her to cease her attack and join them, offering his own blade to her which she acceded to and screaming led her ghosts and swords to slay all the followers of Chaos in the area.[1b]

Later in the Age of Sigmar, she manifested to slay the merchant Odo Thring who was selling one of her blades, her scream bursting his heart.[4]