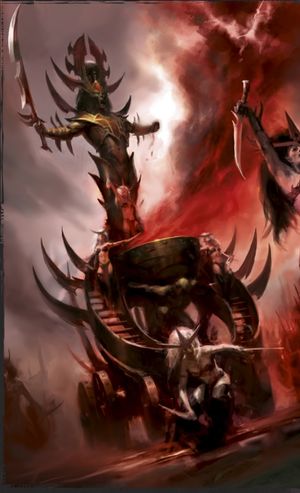 A Cauldron of Blood.

The Cauldrons of Blood are the greatest of the Daughters of Khaine war shrines, for it is said that they are gifts from Khaine himself. At least, this is Morathi's claim each time she gifts one of the great iron cauldrons to the temple of a newly-founded Khainite sect.[1a]

For a battle worthy of their finest ritual offerings, the war covens of the Daughters of Khaine bring forth the greatest of their religion's icons, a cauldrons of Blood. Mounted on iron-shod wheels, these mobile shrines grind forward, propelled solely by the incantations of their riders. Imbued heavily with dark enchantments and topped with a statue of a Avatar of Khaine, its mere presence on the battlefield is inspiring to the Daughters of Khaine.[1a]

When a Hag Queen accompanies the altar, she brings the blood within the iron vat to a furious boil until it gives off billowing clouds of crimson steam. This offers strange protections, and Khainites nearby find themselves able to shrug off wounds or dodge blows more easily. Those Khainites that drink of the cauldron's brew find themselves plunged into an ecstasy of violence, their martial prowess magnified by the Lord of Murder.[1a]