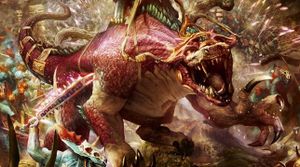 Carnosaurs are gigantic, bipedal lizards that are often seen in the war-hosts of the Seraphon, but can also be found in the wild. In either case they are ferocious and deadly predators.[1a]

Carnosaurs are large, bipedal reptilian creatures who use their immense, tree-trunk thick tails for balance. Younger Carnosaurs hunt in a manner similar to wolves, running down their prey. But as they grow larger and stockier, they begin to prefer ambush tactics, often using their clawed forelimbs to pin their prey down, then ripping into their meals with their powerful jaws.[1a]

They can be found in the jungles of the Mortal Realms, especially those claimed by the Seraphon. Wild Carnosaurs are notoriously violent, untameable predators. But those raised from eggs to adulthood by Seraphon are manageable enough to serve as mounts.[1a]

A ferocious bellow emitted from a Carnosaur can trigger a deep, primal fear within the living denizens of the Mortal Realms, causing many to flee in panic whenever it is heard.[1a]