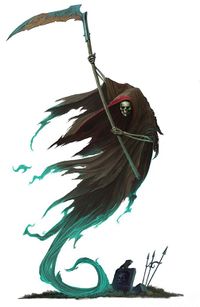 Cairn Wraiths are amongst some of the most powerful Nighthaunt spirits. Their touch drains the life of mortals, their presence being so fell that many a mortal is driven mad with fear long before their death. [3]

Prior to the Necroquake, Cairn Wraiths could be found mostly at haunted sites heavy with Amethyst magic - barrows, graveyards, battlefields, or sites where some great tragedy occurred. Here they would be lone predators, occasionally being bound by passing Vampire Lords or Necromancers. After the Arcanum Optimar shook the realms, however, they roamed freely in greater numbers than ever before. With a single ritualistic action - the binding of the Great Cairnoch - they were all bound to Nagash's will, being conscripted into the Processions. [1a]

Only some of the sickest, sadistic, and twisted souls can descend into the underworld and remain intact - whilst many simply devolve into echoes of themselves, the most spiteful of mass murderers are stripped of all emotion but their unending hatred. As such, they cling onto existence, becoming spectres that delight in hacking down the living. [1a]

Cairn Wraiths each bear a spectral scythe, with which they reap the souls of the living in the same way a mortal farmer reaps a harvest of corn. [1a] [2a]