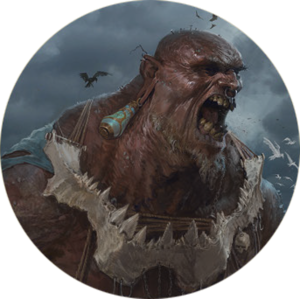 Bundo Whalebiter is a Kraken-eater Mega-Gargant with a devious intellect that haunts the Coast of Tusks. He came into conflict with Idoneth Deepkin operating out of the Icefang Whirlway when they launched a soul-raid against the same village that he was ransacking for food. Angered at the sea monsters ‘flying about out of their water’, he inflicted so wrought so much havoc the Idoneth were forced to flee back into the ocean. [1a]

Bundo, not eager to let the Deepkin go, dived into the waves after them swimming after the glimmer they left in the inky darkness. When he caught up with the light he found not his quarry - but a hurriedly assembled decoy sent to lead him astray, a lone Fangmora Eel with a glowing jar strapped to its back. Nonplussed, Bundo ate the eel, returning to his lair and wearing the captured artefact as an earring on a whim. Over time, the aetherquartz set into the jar increased the gargant's intelligence to dangerous levels. [1a]

He has since led a series of daring raids ever further inland, offering his services to a variety of patrons in exchange for greater wealth. He has begun a trend that has seen many of his kind adopt similar practices – albeit with wildly differing results, for a jar full of Aqshian etching vitriol or Ghurish eater-wasps hung from the ear can be nothing more than a nasty surprise waiting to happen. [1a]