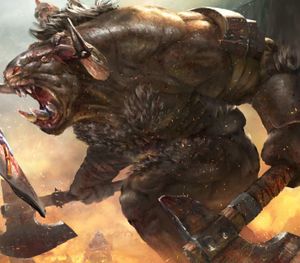 Bullgor Warriors are hulking, bull-headed monstrosities of the Warherds, being twice the height of a man and possessing of both terrifying strength and unnatural resilience. Their kind's ravenous need for blood and meat, known as the Bloodgreed, causes them to descend on their enemies with unbridled ferocity.[1a][1b][2]

They can wield into battle with a wide array of weapons, which they use to cleave gore-soaked swathes through their enemies or strike with their horns, which can use to eviscerate with a single thrust. They can wield a pair of Bullgor Axes, which they can unleash in a whirlwind of fury, a Bullgor Axe with a Bullshield, towering wooden shields, or a Bullgor Great Axe, used to hew down their foes.[1a][1b][2]