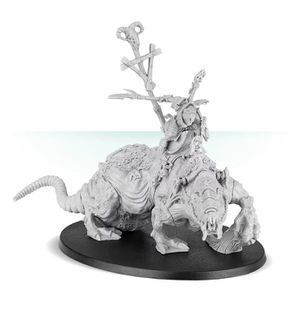 A miniature of a Brood Horror being mounted by a Clawlord.

Brood Horrors are foul rodent creatures that are the monstrous masterpieces of the breeding pits of the Clans Moulder. It is covered in layers of sagging flab and bulging muscles a few of the Skaven and their beasts can tear their enemies as quickly as them. They have grown to such horrific sizes by devouring all of their brood-kin, of which their twisted form still writhe and claw from within the creature. These creatures attack with their fangs, claws and prehensile tails, but their true strength is their ability to reknit their flesh as fast as it can be torn in battle, allowing them to continue to fight despite suffering grievous wounds.[1a][1b]

Only the most ostentatious of Skaven Warlords can ride into battle mounted on these and the sight of such warlord on top of such imposing mount makes other skaven much less likely to act on their disloyalty.[1a]