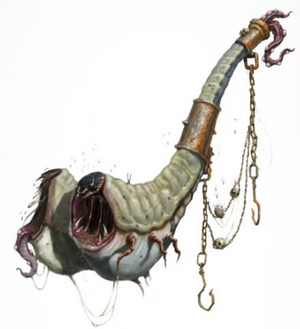 He takes the form of a giant or elder plaguebeast.[1a]

It was Gluhak who brought Brondtos to its knees, after a week-long hunt whose preparations the Beastlord personally oversaw. Though the Godbeast could not be killed, one of its horns was hewn off and consecrated in the name of the Urfather, becoming the dread artefact known as the Dirgehorn.[1a]