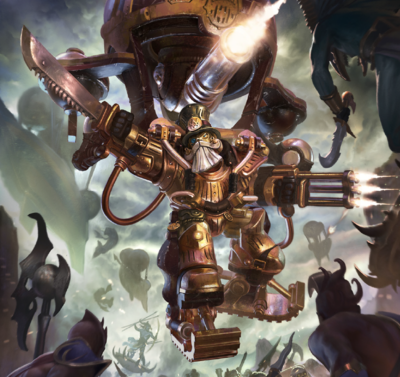 Brokk wears an endrinharness made by Durek Coghammer, which is equipped with advanced weapons in addition to an aetherendrin. Including two mustache-mounted Aetherblaster, a multi-barreled artillery that he calls Magnate's Charter and a large cannon called Grungsson's Boast [2b] [2c] an aethermatic saw for close combat [1b] [2c]

He wears a zhaklinder, a symbol of high rank among arkanauts. [1b]

A mixture of courage, greed for strategic prowess, and a ruthless nose for business helped him rise quickly. [2b]

His preferred strategy in combat is to give orders to his fleet before performing a courageous manoeuvre with the Skyriggers against the greatest threat. [2c]

Brokk Grungsson grew up as the son of the dock worker Grung, who always told him about the life of aeronautical adventures that he had wished for himself. Brokk vowed to receive the title of Grand Admiral of the Council. [2b]

During his time at the academy, he already lived according to the motto of the Kharadron Code "The prey to the winner". He was bold as a young Arkanaut who worked his way up, and his actions earned him medals, commendations, and extra stakes. He was named captain after just a decade after his predecessor was killed by a Harkraken. [1b]

He was appointed Lord-Magnate of Barak-Nar when he led the fleet that drove the Greenskins from the floating island of Madralta. [1b]

When the sky-port of Barak-Zon was besieged for 99 days by a band of Tzeentch demons led by Kairos Fateweaver. Brokk Grungsson led a fleet of the great ports of heaven against the host of demons and fought them back. [1a] [2a]

Brokk Grungsson goes on a grand tour through the Free Cities of Sigmar and is the first Kharadron to meet Sigmar's chief architect, Valius Maliti in Greywater Fastness. After his encounter Brokk breaks off the rest of his trip and convened the Admirals Council of Barak-Nar with the result of negotiating a trade agreement with gray water. [2a]