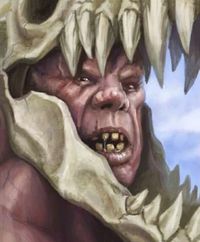 King Brodd is a massive, exceptionally strong gargant, a child of the Godbeast Behemat, that leads the gargant tribes of the Scabrous Sprawl.[1]

Brodd claims he crawled from the Titansmawr chasm as an adult. Any giant belligerent enough to challenge his rule, usually the elders, have their brains bashed out in spectacular displays of violence that none have questioned his rule. He seeks to gather his fellow swamp-dwelling gargants into enough number to take revenge on the Beastmen that tore down his father's temple and use their grounded bones as a mortar to rebuild the temple.[1]

His crown is the skull of a Mouldragon that he killed himself with his bare hands. But his true symbol of rulership and weapon in times of war is a massive granite pillar that was once part of a old Behematian Temple on the Tor Crania that had once been toppled by cyclopean mutants and beastmen.[1]