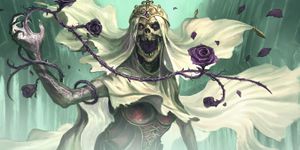 The Briar Queen was a powerful Deathmage and is now a Mirrorghast Banshee. She leads the Thorns of the Briar Queen that stalk the cursed city of Shadespire and the Mortal Realms. [1] 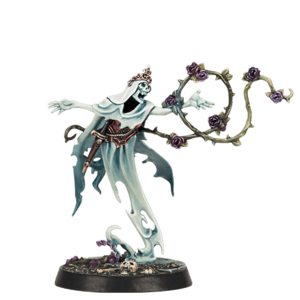 In the Age of Myth as a powerful necromancer in the service of Nagash, she led an army against the city of Shadespire and its rulers the Katophranes. Following a long and bloody campaign she was defeated and captured before being imprisoned in the Nightvault for eternity. The torment of this made her insane, her mind consumed by misery and despair, but still nurturing undying hatred for those who had condemned her to the prison of Obsidian Shadeglass.[1]

In the Age of Sigmar, Nagash released her from the crystalline tomb, shaped her into a banshee with her mastery of necromancy intact and unleashed her upon the growing number of intruders who dared to trespass within the Mirrored City. He also granted her the power to enter the Mortal Realms with her army to claim specific souls, although she always returns to the city in which she suffered such torment, still seeking vengeance. [1]

She is armed with a Briar Whip, and like other Banshees she can attack with a Rending scream. Unlike most Banshees, the Briar Queen is a powerful wizard and necromancer, able to cast the Howling Vortex spell.[1]