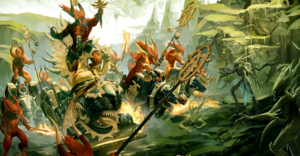 A Herald of Khorne leading daemonic cavalry upon a Bloodthrone

Blood Thrones of Khorne are brass-clad daemon engines fashioned in the image of the throne of Khorne himself. These hell-forged engines belch sulphurous smoke as they crush enemies beneath spiked wheels and filling the battlefield with gore. Even those that survive the rage of the machine will be finished off by the Bloodletter Charioteers or the Herald of Khorne that rides upon the throne.[1]

These engines are a tokens of Khorne's favour and Heralds of Khorne must commit countless acts of slaughter and atrocity to be found worthy of such a gift. It is said that Blood Thrones are forged from a sliver of brass taken from the Blood God's throne and infused with his ever-simmering rage. Regardless of the truth of their creation the demonic vessels bound to them are amongst the most vicious and proudful of those serving Khorne and only the Heralds can control their murderous rage.[1]

In battle the Blood Throne races towards enemy lines while the Rendmaster chooses skulls that will make the most prestigious tribute to Khorne. Blood Thrones often charge straight into battle, tearing gaping holes in the enemy line and carving a bloody path through the panicking formation causing great gouts of crimson gore to erupt into the air with sounds of splintering bone and tearing flesh. The victims of the engine are turned to bloody gruel and consumed, healing whatever wounds the fell machine may have suffered. The skulls from cowards are fed into the baleful workings of the daemon engine while those of the valiant are claimed by the Rendmaster who mounts them on the throne itself.[1]