From Age of Sigmar - Lexicanum
(Redirected from Bloodthirster of Insensate Rage)
Jump to: navigation, search 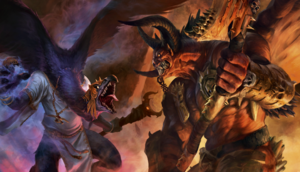 Bloodthirsters of Unfettered Fury have gruesome skull-like heads. They wield Mighty Axe of Khorne and barbed Lashes of Khorne into combat.[2]