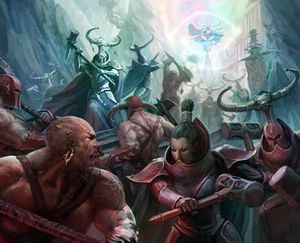 Bloodreavers fighting an army of Lumineth.

Bloodreavers are the frenzied Mortal followers of Khorne and part of his Bloodbound army, whose sheer numbers are their primary weapon. They are frothing killers, whose bodies are covered in thick slabs of muscle and ritual scars. Compared to the rest of the Bloodbound, they are mere mortals from barbarous tribe but are in no way less devoted into their butchery and slaughter than any other follower of the Blood God.[1]

There are vast numbers of Bloodreaver tribes among Khorne's Mortal followers. While each Bloodreaver is insignificant compared to the strength of a Blood Warrior or a Skullreaper, in large bands they become an unstoppable deluge that are able to conquer entire armies and kingdoms.[5a]

The first Bloodreavers begin as Mortal tribesmen and warriors during the Age of Chaos that initially encountered the might of the Bloodbound, and were given the choice of either consuming the torn-out hearts of their kinsmen, or become meat for the dark banquet themselves.[4a]

The many that chose to survive embarked on the path towards becoming a Bloodreaver, becoming bloodthirsty cannibals.[3b] Initially they sag in disgust at the taste of forbidden meat, but eventually they learn to savour the sweet taste and look forward to the satisfaction of ripping apart foes and consuming their flesh.[5a] With each coming battle any sense of guilt or horror at what they've done is washed away by the rending of flesh and spilling of blood, as the Bloodreavers become more and more the servants of the Blood God.[3b]

Some Bloodreavers degenerate completely and become Chaos Spawn, but those who are worthy are able to ascend to the ranks of the Skullreapers.[3a]

Each Bloodreaver tribe is organized as massed throngs of cannibalistic killers, led by Chieftains, who are armed with double-edges blades and axes, and carry grisly trophies into battle.[2]

They wield Reaver Blades and Meatripper Axes into battle.[2]