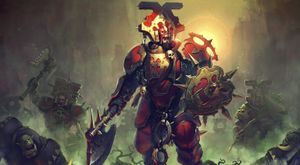 Blood Warriors are berserkers of the Khorne Bloodbound, whose rage and bloodthirsty has taken them over completly. Their fury radiates in the form of heat, causing the air itself to shimmer, while roaring incoherent curses into battle. Even if they have suffered fatal wounds they will continue to fight in a trance-like state.[1][2]

Blood Warriors are mortal who were drenched in the gore of their enemies and attracted Khorne's eyes to their butchery and were deemed worthy of the Red Baptism. Some say this process causes a mortal’s own blood to scab over their skin and harden into plates while others claim they were whisked away to the Realm of Chaos, where the most brutal are rewarded with hellforged arms and armour. The Blood Warriors are gripped by an unquenchable thirst for battle and will be unquestioning servants of Khorne and even those who fought against the Blood God’s hordes can be blessed with the Red Baptism. Relentless butchers encased in plate armour, they stride fearlessly into combat to hack at their foes with axes and drive their spiked fists into exposed flesh. Even when mortally wounded they will continue to fight until the last of their blood has been shed.[6]

The leaders of the Blood Warriors are Chaos Champions.[1][2]

They wield pairs of goreaxes or a goreaxe and a gorefist, buckler-like shields covered in spikes. Some of them may even wield a goreglaive or a jawbone axe into battle. They wear brass-lined armor consecrated in blood and carved with the rune of Khorne on their helms and breastplates. Chaos Champions carry larger axes into battle while Icon Bearers wield detailed banners of Khorne into battle, inspiring other Blood Warriors into greater acts of carnage.[1][2][3][4]

They suffer mutations like the rest of the Bloodbound, with one unusual example being a ravenous maw, where a stomach should be, that gnashes at nearby foes.[3]