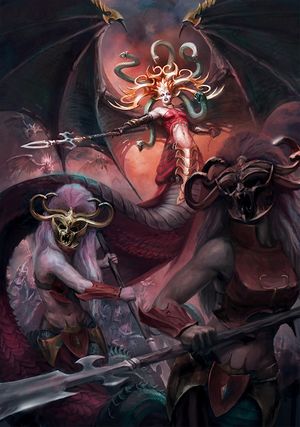 Here, Morathi combined enchantments, shadow magic, and even her own blood to create a new race to serve her as personal handmaidens, and most trusted servants of beings, Melusai. Horrific, serpentine mirrors of Morathi's true form.[2a]

Often serving as bodyguards for the Bloodwrack Medusa or high ranking aelf priestesses, the Blood Sisters can also be found at the forefront of attacking formations of war covens. Normally armed with heartshard glaives they can also perform a magical attack using the darker parts of their souls - the scáith touch which can transform enemies into crystal statues. A truly skilled sister will cut out a foes heart as they do so, trapping them with unending pain. [1c] The walls of the underhall of Kruthú below Hagg Nar are lined with these living monuments, eternally trapped in the moment of their greatest pain. The walls of Morathi's inner sanctum are built from the carved, crystalline corpses of the Melusai's victims.[2b]

Each Blood Sister wears a terrifying kragath war-mask, fashioned after Khaine's terrible visage. The mask acts as a focus for layers and layers of powerful illusory magic, allowing the Melusai to appear as an ordinary aelf. To walk among the ranks of their sisters, and act as eyes and ears of Morathi, sniffing out any dissent or heretical thought.[2b]