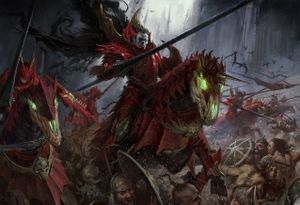 Blood Knights are the elite Soulblight warriors forming a powerful force of cavalry for the Grand Alliance of Death. [1b] Famed for their (usually) crimson coloured armour and ornate weapons they are a dark vision of martial glory. [1d]

Mounted on Nightmares, Blood Knights act as household guards to lords of death or form questing bands that roam the Mortal Realms seeking glory. Many claim to adhere to a code of honour but to those they prey on this can seem merely perverse as they may save a settlement from monsters only to demand payment in innocent blood.[1b]

They are led by Kastelans and supported by Standard Bearers and Hornblowers.[5a][5b]

Blood Knights are armed with ornate Templar Lances or Blades guarded by potent Bloodshields and bedecked in crimson armour.[1d][5a][5b]

With Nagash shattered by Archaon, Prince Vhordrai seeks to overthrow his master and hurl his remnants through the Realmgate of Yulghuan but is stopped by Arkhan the Black and entombed in a realmstone coffin, his castle banished to travel the Mortal Realms. [1b]

Neferata takes the firstborn daughters of many ruling families with her, the orphans of a thousand murdered kingdoms and convinces The Blood Dragon himself, said to be the finest warrior Shyish had ever seen to teach them the arts of war and the way of the Blood Dragon. [3a]

During the Age of Chaos Adhema led a force of her Blood Knight sisters and accompanied Neferata to the far north of Realm of Shyish to aid the Rictus Clans in their fight against the Rotbringers led by the Order of the Fly. [2]

Following his release and despite his madness, many Blood Knights seek out Crimson Keep as a form of pilgrimage, hoping to face worthy foes at the side of the Lord of the Keep who some call a Saint of Slaughter.[1b][1c]

Prince Vhordrai leads a force of Blood Knights from the manifesting Crimson Keep into the heart of the ceremony to consecrate the Blackiron Citadel and they carve their way through the Sons of Mallus gathered there. [1a]

Adhema has recently been seeking the Eight Lamentations having temporarily allied herself with several agents of Grungni who are doing the same.[3]