From Age of Sigmar - Lexicanum
(Redirected from Bloab)
Jump to: navigation, search 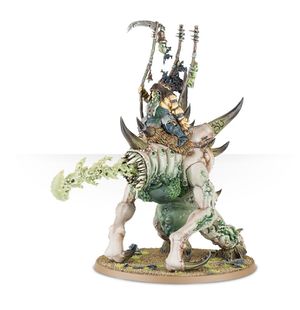 He was first a great mortal champion of a tribe that worshipped the Chaos god Nurgle, however his divine patron was offended by his constant sadistic treatment of small animals and insects. In response the god sent a mass of daemon-flies into the champion's cave when he was slumbering, whilst their thousands of eggs were laid within him and the emerging maggots began to consume his flesh. Hollowed out, the fleshy sack was unable to perish - a painful lesson that was learned well by the champion. Bloab now spreads teeming, pestilent life throughout the Mortal Realms, even granted a Maggoth steed, Bilespurter.[1]

Tornus the Redeemed slew the him during the Realmgate Wars but he arose anew, and it is said as long as the swarm survives, so does he.[1]