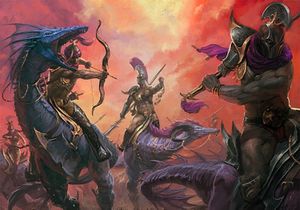 Blissbarb Seekers are Blissbarb Archers, that, having tired of spending their time from afar, sought to acquire an Exalted Steed of Slaanesh. They name themselves after their daemonic counterparts as a display of both pride and hubris. [1a]

The resolve to tame an Exalted Steed usually comes to Sybarites after having a particularly close brush with death, or a similarly traumatic experience. The experience makes them want to experience life's bounties to the fullest, after coming so close to tasting death. As such, they immediately seek out the daemonic beasts. Such self-destructive excess attracts them, and after a long confrontation, the now-battered mortal is rewarded with a mount fit for a champion. [1a]

The creed of the mounted Blissbarb is to always go faster - they are obsessed with murder at high-speed, letting loose volleys after volley of deadly-accurate arrows into the ranks of the foe, cackling madly as they do so.[1a]

From the long, sinuous tongues of their mounts drips a poison of the foulest kind. It is with this venom that the Blissbarb Seekers coat their arrowheads, with even a drop spelling a tormenting death for the target. Both Sybarite and daemon bond over this, finding a cruel delight in watching the afflicted scream until their vocal cords go raw. [1a]