From Age of Sigmar - Lexicanum
(Redirected from Bladebringer)
Jump to: navigation, search 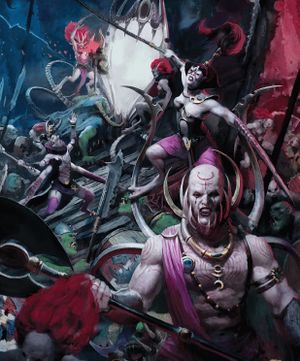 The many kinds of Heralds of Slaanesh, including the noteworthy Syll Lewdtongue and the Masque of Slaanesh

Heralds of Slaanesh are the favoured Daemonettes that lead the Hedonites hosts. These creatures vary greatly in form and duty, from lone dancer-warriors to jealous custodians that carry powerful Slaaneshi artefacts to war. Those that rise up to the heights of command bring a variety of fascinating deaths to their enemies.[1a]

They all have a great taste for violence and excess, as do all of the Dark Prince's faithful, though it is not as all-consuming as that of the Keeper of Secrets. Instead, the Heralds focus on the myriad other paths to damnation. In many ways they act as dark muses, inspiring those they latch onto - not to create works of great musical or artistic accomplishment, but to ensure the poor soul spirals into obsession and inhumanity until they reach a place they can never crawl back from. With promises of glory and fulfilment, a Herald twists the aspirations and ambitions of its prey into narcissism, paranoia and madness, luring the victim onto a road towards darkness and damnation.[1a]

Those who dwell highest in Slaanesh's regard often hail from the ranks of his Heralds, who are the most artful of his sycophantic servants. Each Herald fulfils a hundred and more roles in Slaanesh's service, though all of them lead to the same end - the corruption of everything, and the remaking of the Realms in the Dark Prince's image. [1a]

Though it has fallen by the wayside Since Slaanesh's imprisonment, there was once a fluid hierarchy governing the Heralds of Slaanesh, a way for the Hedonites to tell who was high in favour and who was spurned to the point of exile. The more privileged a Daemonette was - the more they empowered and pleased the Dark Prince - the closer to his throne they were allowed to approach whenever he was seated. The most favoured of their number, those who were usually the quickest of wit, the most graceful and the most deadly of his lesser daemons were allowed upon Slaanesh's dais to feed him treats and caress his body with their barbed claws. To these depraved and decadent creatures, Slaanesh entrusted his more subtle machinations, for his greater daemons are created primarily for excessive violence, rather than the delicate touch that the Dark Prince's plans usually require. [1a]

Since Slaanesh's imprisonment within Uhl-Gysh, the fickle but undeniable logic of his favouritism has fallen to an anarchic frenzy of disorder, slander and guesswork. The Heralds of Slaanesh pine so keenly for their wayward Prince that the grief of a spurned soulmate or bereaved spouse is but a puddle next to the ocean of their heartbreak. Yet still they carry on the dark work they were created for, hoping to please their master, wherever he may be. These once favoured creatures tread paths of war without the reassuring presence of their god, taking their bitterness and sadness out on mortals who know nothing of true agony. The Heralds' every act and hope is bent towards the day, when they might be reunited with their patron in ecstatic glory, a fate that they know will come in time. They believe that the their mighty god wished to be confined, and known that if he was truly gone they would also have been destroyed. The Heralds wait for the day Slaanesh will return them, to continue his work bending reality to his will.[1a]

During the Age of Myth, the Heralds known as Bladebringers were given a scared duty, to bear the chaos infused blades forged in Slaanesh's kingdom into the worlds of mortal men. At first first this was done one by one, each elegantly curved weapon left in secret for a powerful warrior or warlord. Those who took up these dark blades found the swords whispering to them in the night, driving them ever further along the path of the oppressor or murderer.[1c]

Yet the blades took their toll on the Heralds that bore them into reality, they too wished to bring the weapons to bear, not to merely carry them. The Heralds soon devised a way around this, to fight with ever more Slaaneshi weapons, culminating in the invention of the bladed chariot. Using these instruments of war Bladebringers could now unleash the gratifying carnage they yearned for.[1c]

A Contorted Epitome is not a single Daemonette, but paired attendants chosen for their ability to reside within another Daemonette's presence. This close bond is cemented by a scared guardianship of an ornate Mirror, known as the Mirror of Absorption. It is a priceless magical artefact entrusted to them from Slaanesh's palace. This treasure is not normal, it is both a daemonic being as it is an object. The mirror writhes on striated tentacles that move at the Daemonettes' command.[1b]

Legends claim that the Contorted Epitome's genesis can be traced to an artificer known as Vennatan in an age long past. He strove to perfect the art of silvering glass, and each of his prototype mirrors were fought over by the rich and noble. Slaanesh was greatly pleased by the epidemic of narcissism that ensued, and plotted to capture the alchemist for his own agenda, this was done on Vennatan's deathbed. As the mortal gazed proudly upon his reflection to look back upon past deeds, Slaanesh reached out through the glass and drew him into the Temple of Twisted Mirrors, where he was imprisoned forever more.[1b]

Hoping to strike back against his captor, Vennatan invented the Mirror of Absorption, a looking glass with the ability to devour energies, which would slowly drain the power of Slaanesh himself. Unfortunately, that artefact was soon shattered by the sheer magnitude of Slaanesh's vanity. Recognising its worth the Dark Prince forced Vennatan to make dozens more of the devices, bound them with semi-sentient frameworks that would move independently, and gifted them to his favourite Heralds. So was born the Contorted Epitome.[1b] 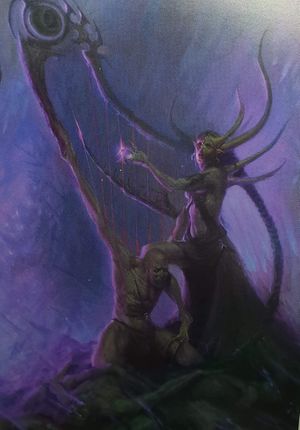 Infernal Enrapturesses are music makers, weavers of harmonies and mind shattering cacophonies. The role of the Infernal Enrapturesses is to often act as the vanguard of a Slaaneshi army, using their beguiling charms and glamours to infiltrate the cities of their enemies. Veiled by daemonic illusion, they present themselves as muses to artists who strive to create beauty amidst the horrors of war. In feeding the artist's passions, the Enrapturess allows the craft of their prey to flourish, bringing out of them the greatness that had always lain dormant.[1b]

At first the Herald comes to the artists in their dreams, stripping them of their inhibitions and magnifying the ambition and obsession buried deep within their souls. The daemons then places in their minds a vision of the perfect piece of music that they will one day compose, often in the prey's mind it will be a piece that will end wars or unite empires. Those the Enrapturess visits enter a state of bliss. Many die of starvation, having forsaken food and drink as they toil of their masterpiece.[1b]

In other cases some are reduced to gibbering lunatics, their minds and souls unable to bear the weight of their great undertaking. In time, when a single musician remains, the pupil learns that in order for their great work to be completed, they must become the instrument of its execution and give over their flesh to be played by the muse.[1b]

The instrument wrought from the contorted body of that willing subject is known as the Heartstring Lyre. Strung with the tattered fragments of the mortal's soul, the lyre emits screams of pure elation and raw torment that vibrate through the physical and spiritual essences of those who hear them.

When the Dark Prince's legions march, the Infernal Enrapturesses use their lyres to bring the battlefield closer into harmonic alignment with Slaanesh's domain, which allows ever more daemons to pour through the veil of reality so they can join the fray.[1b]

The most numerous of the Heralds of Slaanesh are known as Viceleaders. They are experts at finding immoral and impure individuals, and drawing these souls further into their own damnation.[1b]

Viceleaders take the Dark Prince's followers on a constant warpath, using seductive sorceries to carefully corrupt chosen victims and inspire them to give into their most detestable urges. In the past this process could take months, years or even decades to achieve; Daemonettes are functionally immortal, and the creatures often savour the slow blossoming of their labours much as a vintner savours the maturation of a fine wine. During the first century of the Age of Chaos, when Slaaneshi forces were responsible for the downfall of both kingdoms and empires, the conquests of Slaanesh relied on these slow and subtle acts of corruption more than they did savagery and slaughter. But with the armies of Sigmar now on the march, every land has now fallen into a near state of constant war, and the gradual manipulation of a soul has become luxury for the daemons.[1a]

New cults are constantly rising in many of the cities of the realms, each devoted to a Viceleader who acts like a conduit for Slaanesh. Yet there is a sense of haste - perhaps even desperation - beneath their orgiastic rituals of flesh, greed, gluttony and avarice. The Viceleaders of the Dark Prince must work quickly if they are to seize back that which they have lost.[1a]

In these times of war and upheaval, it is common for a Viceleader to sully a soul within a matter of moments, picking a victim to undo and then move on to the next. Using dark whispers and seductive motions, they can reduce their victims to a gibbering wreck, before ending the torment at its peak, with a swift snip of their claws.[1a]