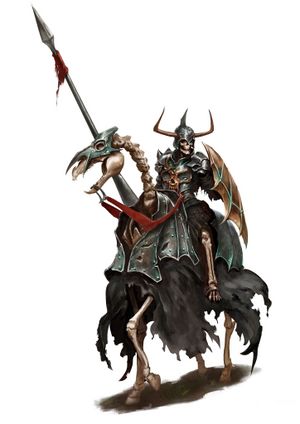 Blackknights are the Skeleton cavalry of the Deathrattle armies. They are the princes and nobles of a Wight King's kingdom, mounted on top of Skeletal Steeds and utterly dedicated to obeying the commands of their lord. In their wake are left ruptured corpses and the chill aura of death.[1][2a][2b]

They are led by Hell Knight and supported by Standard Bearers and Hornblowers.[1][2a][2b]

Mounted atop tireless skeletal steeds, Black Knights form the shock regiments of the Deathrattle Kingdoms. The sheer momentum of their charges and the bone-splintering force of their impact buckle shieldwalls, while long heirloom lances skewer enemies and even punch through steel plate. Then they ride down those that break off and try to flee with the same satisfaction of a rat-catcher exterminating a nest of vermin.[3]

Black Knights as former landed nobles and feudal scions with the wealth necessary to maintain a suitable war-steed had the honour of riding at the head of their liege’s armies, and many Wight Kings still grant their Black Knights the right to launch the first charge of battle much to the annoyance of allied bands of Blood Knights. Black Knights retain a lingering sense of pride in their status, refusing to dip their lances before one who has not yet earned their respect through conquest but the reality is they are bound to a single, eternal duty like most Deathrattle and the satisfaction from the fury of the charge is forever fleeting.[3]

They wield rusted Barrow Lances, easily able to punch through armor and bone, paired with Crypt Shields into battle.[1][2a][2b]