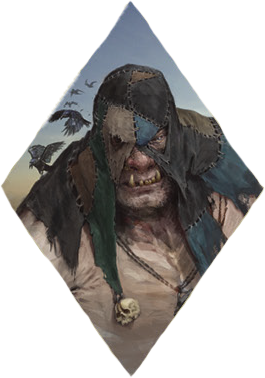 Big Drogg Fort-Kicka is a Gatebreaker Mega-Gargant known for his immense size and luck. Shyishan by birth, Drogg has long lumbered across the ravaged lands of Hallost. He is unique in that whilst most of that region’s gargants have fallen to Chaos invaders, questing Stormcast Eternals or the howling undead released by Nagash's necroquake, it is not so for the Fort-kicka. For unknown reasons, the Gargant has a knack for being on the winning side, sacking dozens of cities over almost a century of stamping flat anything that irritates him. He has fought for many a Necromancer and vampire lord; on one memorable occasion, Mannfred von Carstein bribed him to attack an orruk horde from within its ranks in exchange for three barrels of royal blood. Big Drogg was happy to swap sides, for he has a taste for clotted gore. [1a]

The Gatebreaker has devoured so many corpses in so many stages of decomposition, that he has a severe case of halitosis – his vile breath is a weapon in itself, pungent enough to wilt plants. Some from the hordes of Destruction call him a turncoat for his treachery, but they know nothing of Drogg’s true agenda. The Gargant hopes that by being a regular fixture in the armies of Death, he can win the trust of Nagash himself – and clobber the god when his back is turned. [1a]