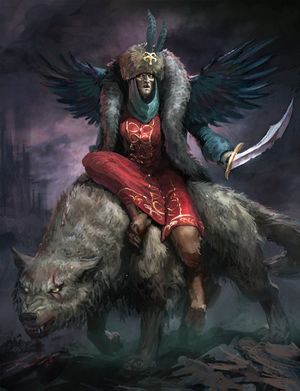 Belladamma Volga, the first of the Vyrkos is a Soulblight Vampire who is the matriarch and the legendary founder of the Vyrkos Dynasty.[1a]

According to Shyishian legends Belladamma Volga, was turned into a vampire by a bargain with the undead godbeast Hrunspuul, the Hound of the Cairns and from her descends the Vyrkos Dynasty and its unique breed of vampires.[1a]

Little his known about her but legends about her are spread across the Prime Innerlands. In Stygxx, it is said that to see her once upon the horizon, silhouetted by Lunaghast’s sinister glow, is an omen of impending disaster, twice the death of a lover and thrice only the gods can save them from her pursuit. In Dhûmi, a tale about her talks about a starving girl-child lost in the woods who encountered Volga and was given a bowl of steaming broth. The girl asked her twice to help her hungering family but was denied both times and upon the third request, Volga magically transmuted the girl’s kin into wolves, laughing as they feasted upon the rest of their village.[1b]

Belladamma rides upon the hulking wolf Rothabak who is claimed to be one of the matriarch’s ill-fated suitors.[1b]

Belladamma Volga is armed with a Timeworn Scimitar and is a skilled swordswoman but true talent id her sorcery. With an intuitive command over their savage curse greater than any Vyrkos she can induce horrifying transfigurations upon enemies with a single gesture, their body contorting into a Dire Wolf.[1b]

At her side are packs of slavering Dire Wolves, all of whom are subservient to their fierce she-alpha.[1b]