The Mortal Realms are the latest iteration of an eternal cycle. In the previous cycle, the World-That-Was now known as Mallus saw the rise of grand nations and gods born of mortal beliefs. But where life prospered, so too did Chaos.[1b]

When the World-That-Was finally succumbed to the Ruinous Powers it shattered to pieces. As the World-That-Was crumbled, the magical winds that saturated it are expelled into the Aetheric Void of the Cosmos Arcane. Various kinds of magic gather together, crystallising and coalescing with nebulae, cosmic dust and the debris of the former world to form landscapes of near infinite size.[1b][3a]

Contained in Realmspheres, the magic often solidifies to form vast discs and archipelagos of solid magic.[1b][3a] 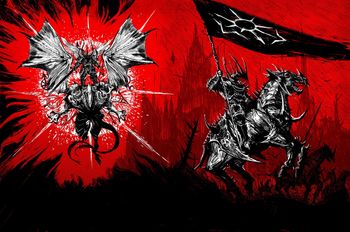 After destroying the World-That-Was, Archaon rode across the Realm of Chaos and between worlds seeking slaughter. Whenever he marched out of the cursed dimension, kingdoms and empires were annihilated in the name of the Dark Gods. His countless victories and trophies achieved during the Everchosen's crusade forged grim legends that still echo in the Realm of Chaos.[2a]

The scourging of the Yorndish Kingdoms

The Indomitable Bloodline that had ruled the Yorndish Kingdoms for thousands of years is slaughtered in a single night by Archaon. By the time the Sickle-thirst Moons set on the Yorndish palace, the Everchosen stood knee-deep in the river of blood that hailed from the three hundred decapitated royal bodies.[2a]

The infection of Shantor Isle

Archaon brought the seven plagues of Nurgle to Shantor Isle. As the Everchosen turned the Coraltemples of Shantor's halls black with decay, the Shantorian priests called upon their protectors, the Shantorian Deepguard reputed for their immunity to disease and poison. However, Archaon's standing in Nurgle's favour was such that when the Deepguard emerged to face the Everchosen, their eyes already weeped pus and their joints were swollen with fluid.[2a]

The theft of the Star Crucible

As the three-souled serpent god Y'ulae constructed the Star Crucible, Archaon formed an alliance with the Tzeentchian Sorcerers of Zyr and a cabal of Slaaneshi Spell-sirens in order to steal the artefact. With a body made of light and fire, Y'ulae was immune to all blades, magic and hexes. Provoking the creature into battle, Archaon tricked Y'ulae by using its arrogance against it. The Everchosen sacrificed his allies to the wrath of Y'ulae, snatching their souls to weave a sorcerous cage of prismatic mirrors around the god. Y'ulea beast's body exploded in a thousand brilliant hues as the prisms channelled and dissipated its incorporeal form, allowing Archaon to claim the artefact.[2a]

The bursting of the Hedonshi Emperors

For six hundred and sixty-sixty nights, Archaon fought an insidious war against the bloated Hedonshi Emperors. These daemon lieges of Slaanesh feared no weapon and ruled over hundreds of kingdoms. To defeat them, Archaon brought daily tribute to the Hedonshi in the form of armies of slaves for use in their sadistic rituals. On the six hundred and sixty-sixtieth night, the Hedonshi Emperors had ate so much that they exploded, drowning their own vassals in torrents of noxious pink slime.[2a]

From stones in Ymnog's belly grow Behemat and his brothers. Only Behemat eventually escape and legends say that the first gargants crawled from Behemat’s mouth.[3a] 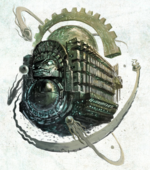 When the World-That-Was fell, the Seraphons were forced to launch a great exodus into the Aetheric Void. To limit losses amongst their servants during their voyage, the slanns magically compelled the most into a state of suspended animation.[6a]

Some legends say that Dracothion guided the Seraphons to the Mortal Realms in one way or another.[5a]

Skink scholars postulate that the earliest Seraphons were formed of Dracothion's breath. Others believe that Dracothion re-energised the Seraphons' ziggurat-vessels and gave them the ability to independently traverse the void, as well as inundated the long-dormant spawning pools with the magic of the heavens. It is said that this moment marked the creation of the first Seraphons, reborn by the touch of Azyr.[6a]

Still others claim that when Dracothion looked upon the ziggurat-vessels with curiosity, the slanns formed a telepathic link with the godbeast. Afflicted with visions of the World-That-Was' destruction, Dracothion wept silver tears – possibly a metaphor for the formation of flamelit comets or a rain of shooting stars – that guided the Seraphons to Azyr.[6a]

Ancient Azyrite texts indicate that the first realmgates were formed by the progenitors of the Seraphons, a race known as the Old Ones.[1b] It is them who taught the slanns the principles of Realmgate technology.[6b] Scholars even believe that the slanns were partially responsible for constructing the realmgates present in the World-That-Was. [6b]

The Mortal Realms therefore become connected by a vast web of these dimensional pathways. The cosmic pattern hence forth established by these realmgates is of a complexity that exceeds the comprehension of gods and sages alike.[1b]

Over time, many sapient races started to populate the Mortal Realms.

The Aelves were reduced to a pitiful remnant during the destruction of the World-That-Was. As such, only a small number reached the Mortal Realms intact with the help of magical enchantments casted by their former pantheon. Unlike their duardin counterparts, the Aelves were very rare and hid from other species that they considered inferior out of hubris.[8a]

Grots and Orruks have infested the Mortal Realms for longer than anyone can remember. As such, they predate the coming and awakening of the Ascended Deities.[9a][9b]

Time of the Bray 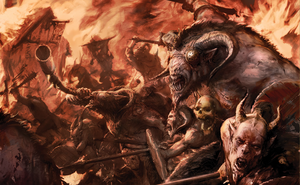 The Beasts of Chaos were already an ancient evil spoken in legends during the Age of Myth.

In time immemorial, the Greatfrays preyed upon the primitive bands that populated the realms. To be a mortal in such time was to live amongst the embodiment of your most primal fears – nightmares of flesh and blood that came to maim and kill.[10a]

Even the oldest tomes and oral traditions fail at recounting a time devoid of the Beasts of Chaos. As a result, many legends speculate on the origin of the wild children of Chaos.[10a]

Dracothion comes upon a remnant of the World-That-Was, Mallus. Clinging to it was Sigmar, who Dracothion decides to revive with a warming breath after sensing a kindred spirit in him.[3a]

Dracothion brings the ailing god to the Mortal Realms, and there set Mallus in Azyr's firmament.[1a]