From Age of Sigmar - Lexicanum
(Redirected from Beasts of Nurgle)
Jump to: navigation, search 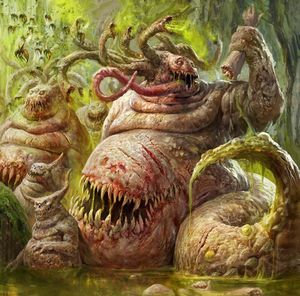 Beasts of Nurgle playing with the remains of their "playmates"

Beasts of Nurgle are slug-like Daemons of Nurgle with fanged maws and diseased tentacles that permeate with an unspeakable reek that wafts from their bodies.[1a][1b][2]

They are slug-like beasts with enormous bodies made of slime-slick muscle and blubber. Their maws are fanged and can yawn wide while their tongues are slobbering. Their humongous bellies can have toothed maws, deep cuts or a large gapping wound with exposed organs. They can have webbed or clawed limbs. Their faces can feature a single cyclopean eye, a icon of nurgle where the eye should be or a pair of eyes almost bursting from their skulls. Around their head burst a crest of diseased tentacles. Their tongue are usually long and can take many shapes.[2]

These stupid daemons are unnaturally friendly and enthusiastic, their minds completely absent of malice or spite but ever-so desperate for attention. When they go into battle they burble bellow of joy as they seek to play with their enemies, unwittingly smothering them with claw, tentacle and slobbering, poisonous tongue. Once their playmate is dead from the Beast's joy it will squirm off in search of new victims.[1a][1b][2]

Their bodies produce a paralytic slime that leaves their victims helpless. They mere presence is a locus of virulence increasing the damage done by strong Nurglite Daemons. Their disgusting bodies are resilent, able to ignore all but the most resilient of wounds.[1a][1b]