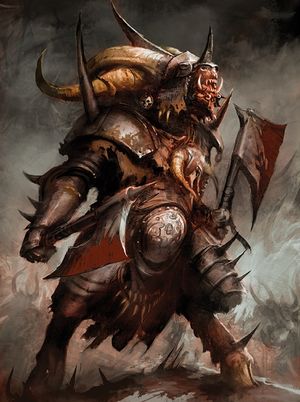 Beastlords are the largest and strongest Beastmen of the Brayherds. They are almost always the apex predators of these herds, being respected by their kin for both their stature, capacity for violence and destruction, and brutal cunning enough to cow and command the teeming throngs of the Beastherds. [1a]

Beastlords arise from the ranks of the Gors. Whereas all the weakest find themselves killed or eaten by the warped monstrosities of the chaos-ridden wilds, the strongest assert themselves as predators to be feared. With every rival they defeat, they grow even more dominant, their bodies rippling with muscle and their horns growing to the size of swords. Greater intelligence sees these beasts launching many successful raids upon enemy territories, from which they garner vast spoils to be offered to their Herdstone, as well as raw materials with which to fashion themselves better armour and weapons. [1a]

Eventually, such a creature will challenge the alphabeast of its beastherd, believing itself to be mightier, and amidst the bloodthirsty braying of the many onlookers, the two will engage in savage combat. These challenges can last for days or seconds, with the greater beast impaling the lesser on its horns or crushing its rival’s skull beneath its hooves. Either way, whoever wins becomes the undisputed Beastlord, a position they hold until they are challenged by an even stronger creature. [1a]

With a Beastlord at its head, a beastherd is less like an army and more like a hunting pack. The Beastlord leads its herds to stalk and encircle their prey, gaining advantage by sowing terror and confusion through the enemy's ranks and ensuring that there is no place for their foes to run. When the time arrives, the Beastlord signals the attack with a bloodthirsty roar, which is joined by the blasts of brayhorns on all sides of the enemy’s position. [1a]

The Beastlord charges into the fray with ferocious vigour, bellowing a challenge to any foolish enough to face it. Amidst the massacre, the Beastlord proudly asserts its own ferocity, holding aloft the severed heads and spilt innards of freshly butchered foes for its enemies and followers to see. When the Beastlord comes across an opposing champion its full fury is at last unleashed, for to maintain its unquestioned authority, a Beastlord must not only dominate all other heroes of the enemy as well. [1a]

A Beastlord is most often armed with a pair of brutal axes, with which it carves a gory path through the ranks of its enemies. [1a]