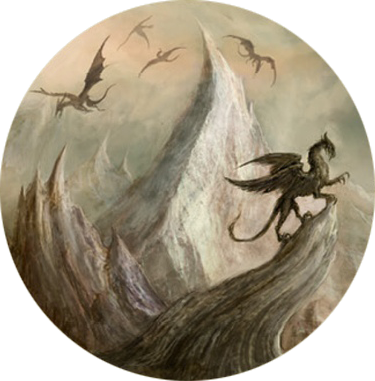 The Beastgrave in Ghur

The Beastgrave is an immense predatory living mountain situated in the Realm of Ghur that lures explorers into its labyrinthine guts. While the name Beastgrave is refers to a single mountain the primitive tribes that live there often refer to the region around the mountain as for the, Beastgrave is an all-encompassing presence that watches over them with a silent hunger.[1a]

Chimerical statues with eird sigils created from animal bones mark the borders of Beastgrave. After that is a land of deep gulleys and rearing crags with sharp rocks that tear the flesh of the unwary. The light here is searing while the shadows are hard and cold, plants that grow here are coiling horrors with inch-long thorns and flesh-eating sap. However when slopes near the foot of the mountain are surprisingly easy to climb with time-worn trails scale the winding around outcroppings of ancient ruins and remnants of camps left by other explorers. The mountain's call becomes increasingly stronger, tunnel entrances appear to yawn invitingly, some see the faint glint of gold, hear whispered promises, or the clash of distant blades echoing up from below. The compulsion to push on grows greater discouraging thoughts about turning back.[1a][1b]

Within it are tunnels that wind and twist to confuse even those with the keenest sense of direction. Lights filter from invisible shafts while floors and walls recede suddenly into darkness. Dead ends and sudden drops are common while open spaces are honeycombed with side entrances and twisted columns. Deeper into Beastgrave are vast caverns that echo even slightest sound, spiky sigils and disturbingly alien figures covering the walls. Acidic fluids that eat away stone, metal and flesh trickle from above. Molten amber rolls down corridors to engulf entire chambers, carcasses of fallen beasts, gnawed to the bone by unseen scavengers are swallowed by the amber tides. In some areas entire walls or floors are formed from smooth, opaque amber that recede into the distance for leagues upon leagues. Staring too long into the golden-brown depths cause explorers to see ancient treasures just out of reach, strange lights or the tortured features of those the mountain has claimed. Even deeper treasures lie mingled with cracked and mangled bone, corridors shift and rearrange themselves by the moment. The mountain's hollow hunger becomes more apparent as rocks split open in yawning cracks to devour the bodies of fallen. [1b]

Longer the person prowls the tunnels, the more they fight their enemies and the greater the amount of blood they shed upon the mountain's thirsting stones, the more predatory and feral the person become. The sentience of Beastgrave leech into the souls of those who fight inside sharpening their senses and increasing their aggression. Many forget their original intent as their mind drowns in the instinct to hunt and slay.[1b]

Beastgrave is infected by the Katophrane curse, depriving the mountain of its sustenance. In its hunger, Beastgrave awakened before Ghur’s primal resurgence was ready, releasing the solid amber that has previously filled the region known as Direchasm.[2a]

Within the mountain’s roots, warbands are consumed by the mountain’s powerful emotions. The rooms of Direchasm are dark, only lit by a red light that glows in clefts and gullies. Tomb-like rooms are filled with riches and treasures, some from primeval civilizations that had been trapped within the amber before living memory. The walls are rocky, and hot to touch, while the ground shifts as though the mountain itself is moving.[2a]

Within this amber, many fearsome and fabled secrets once lived, but with the purging of the amber, many fled to other mountains, however dark entities still haunt the shadows. These remaining beings hunt Direchasm’s deepest tunnels, desperate to consume, and regain their strength to have revenge against Beastgrave. The warbands within Direchasm occasionally catch glimpses of large, spined shapes moving in the dark red light, however they’re quickly forgotten until a companion disappears, screaming.[2a]