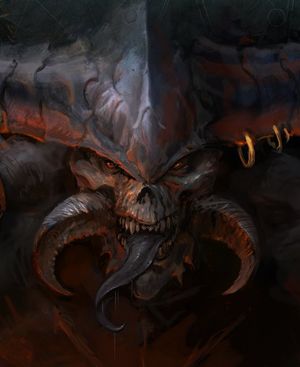 Be’lakor, also known as the First Prince of Chaos and the Dark Master, is the first and only Daemon Prince to have ascended through the favour of all the dark pantheon, giving him a level of relative autonomy. His schemes straddle realms and span centuries, and may even fight alongside the forces of all the Chaos Gods, but his true goals remain unknown. His manipulations are subtle and far-ranging and when Be’lakor takes to battle his enemies find themselves playing perfectly into his hands. He is served by a vast Daemonic host known as the Legion of the First Prince. [1b][2]

Many legends exist concerning Be’lakor’s origins. Some believe that he was the first mortal to achieve apotheosis, but grew resentful seeing many others being granted daemonhood and now desires to supplant the Dark Powers themselves. Another legend claims that Be’lakor sought to become the most favoured of champions and the gods amused by his ambitions, cursed him to instead crown the Everchosen, sparking a mutual antipathy with Archaon. Across Ulgu can be found ancient pictograms depicting a being resembling Be’lakor, fuelling belief that he may once ruled the Realm before the coming of Malerion, and that in his desire to maintain his throne against the aelven god he turned to the Dark Powers.[1b]

During the Age of Chaos the seven Shadow Cities of the Simrulas ruled by Masters of illusion and subterfuge known as the Umbral Lords slaughter the invading armies of Archaon. However Be’lakor whispered promises of salvation to each lord while weaving a complex web of intrigue, murder and torment that turns the Umbral Lords paranoid and fearful of their own kind. When Be'lakor sent his daemonic legions the cities were easily destroyed, the souls of their occupants devoured and upon them statues woven from shadow honouring Be'lakor were raised. [1a]

During the Siege of the Eightpoints Be'lakor personally led the Legion of the First Prince in the Battle of the Varanspire where they clashed against the Nighthaunt of the Legion of Grief under Lady Olynder . Be'lakor duelled the Mortarch of Grief and defeated her, banishing her from the Eightpoints while his army overran the spectral undead.[3a]