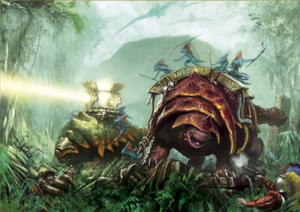 Bastiladons are massive reptilian creatures that are often found in territories claimed by the Seraphon. The massive, naturally armored creatures are often used by the Skinks as war-mounts.[1a]

Bastiladons are often compared to sentient, walking fortresses due to their immense size and the heavy shield-scales that cover their bodies. Many Skinks are convinced that the first Bastiladons were created by the Old Ones, though they have no proof, due to their belief that such creatures could not have occurred naturally.[1a]

In addition to their bulk and heavy scales, the Bastiladons have clubbed tails that can be used to defend themselves.[1a]

They can often be found populating the jungles around Seraphon Temple Cities.[1a]

According to legends spoken of among the Skinks, the first Bastiladon was created by the Old Ones by compacting celestial energy into an atom, creating an unyielding soul, then layering shield-scales atop it.[1a]

Bastiladon-scale Plate Armour is considered to be of great value, but few Trade Pioneers are willing to risk their lives trying to pry scales from the hides of the invulnerable beasts. Some will however attempt to sell convincing fakes.[1a]