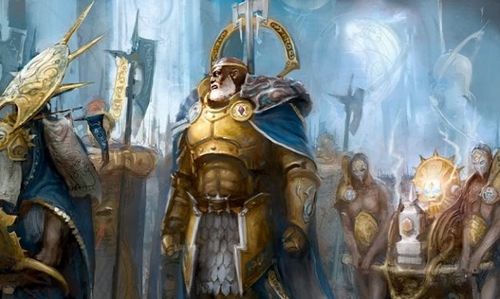 Bastian Carthalos in a procession.

Bastian Carthalos, also known as Thunderborn and Bastian the Late, is the Lord-Commander of the Stormcast Eternal's Hammers of Sigmar Stormhost.[1][2c]

Bastian Carthalos is among the oldest that has stood alongside Sigmar and as a mortal he led one of the Twelve Tribes of Bellicose during the Battle of Burning Skies and led a daring assault against the Everchosen himself. Despite being savaged by Dorghar he survived and despite his wounds covered the retreat of tribes to Azyr. He was the last soul to cross the Gates of Azyr before their sealing which resulted in him being nicknamed 'Bastian the Late' by Sigmar.[2c]

Sigmar called upon the power of the ninth Great Bolt, Skjordamar to reforge him. But not even this could not entirely restore his shattered form, hidden beneath his plate is a vortex of raw lightning crackling within a void upon his chest. The empowered Bastian led the first Hammers of Sigmar in the Cleansing of Azyr, destroying all of Sigmar's enemies within a century which resulted in him being named the Lord-Commander of Hammers of Sigmar.[2c]

During the Age of Sigmar he stayed in Azyr to coordinate the war effort but with the coming of the Era of the Beast Bastian was sent by Sigmar to oversee and even spearhead many crusades.[2c]

When those with witchsight in Hammerhal Aqsha begin to see inhuman faces of smoke rising from cracks on the streets to burn those above to ash followed by a series of earthquakes panic spreads across the city resulting a rioting. Bastian Carthalos leads three full chambers of Hammers of Sigmar but instead of joining the Freeguilds in controlling the riots he leads them into the Cloister of Ashes. For two days the city is battered by intense tremors and storms until on the third day Bastian emerges, his armour blackened from head to toe and accompanied by just under fifty Stormcast Eternals. He forbids any further forays into the Stormvault and places a Sacrosanct Chamber to guard its gates at all times.[2a]

Bastian Carthalos is armed with the giant warhammer known as Uskavar, the Sunderer. He is clad in one of the first Thunderstrike Armour made, created personally by Grungni and charged with the same holy energies as the Anvil of Apotheosis.[2d]