Barak-Thryng or the City of the Ancestors is one of six major sky-ports of the Kharadron Overlords. Colour schemes are plain and notably without the "flashy displays of wealth" from those that have "too much aether-gold to waste." [1]

The deeply conservative duardin of Barak-Thryng are the antithesis of the innovative piratical Barak-Mhornar and have a reputation amongst the other Kharadron Overlords as gruff, disapproving grudge holders. They resent any addition or amendment to the Kharadron Code and often fail to recognise those that are made against their will. Tradition holds that any ancestor runes or images must be cast from melted down weapons of antiquity – so that the weapons of the cities forebears still go to war.[1] 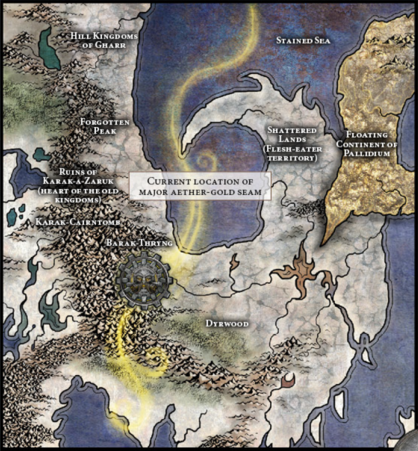 When the powerful Sky-port of Barak-Zhoff disappeared, the city was admitted onto the Geldraad. [3a]

Barak-Thryng can be found in the skies of the Spiral Crux[2a] near the ruins of Karak-A-Zaruk and the Karak Caintomb, to the south east of the Shattered Lands which are claimed by a Flesh-Eater Court. [1]