Barak-Nar is the City of the First Sunrise and currently acknowledged as the pre-eminent sky-port of the Kharadron Overlords. [1]

Time of Reaving: Following the establishment of the Kharadron Code, the fleets of the city begin sweeping out to establish new cloud mines and to expand their frontiers. [1]

Bulwark Norgrimsson leads the fleets of the city to defeat the Waaagh of the Great Ghazbag, in the wake of that victory, Barak-Nar claims the Gleaming Banks. [1]

The wealth and power of the fleets of Barak-Nar ensure victory in the Hydrox Wars. [1]

Njord Aethersson leads an ill-favoured raid on the Olwyr ogors which nearly ruins him, he liquidates all his remaining assets to assemble a new fleet and sacks the Great Anvrokian Dreadhold. The fleets of the city, commanded by Brokk Grungsson destroy Daemon hordes and break the siege of Barak-Zon. [1]

Following the Necroquake, forces from Barak-Nar aid the city of Lethis against the hordes of Nighthaunts commanded by the Mortarch of Grief but are unable to save it. [2a]

A force from the city led by Admiral Borri Kraglan attacks the Thrice-Forged Fastness and finds an ancient artefact which may steer the way to the lost Sky-port of Barak-Zhoff. Despite orders to the contrary, Kraglan leads a force in search of the city, breaking the siege of the Empyrean Bastion Stormkeep of the Sigmarite Brotherhood to claim the next clue. Finally, they locate the lost hold that launched the lost Sky-port but finds it has been claimed and corrupted by Skaven, at a great cost they destroy the tainted fortress it launches, reuniting the two fleets of Brak-Nar. [3] 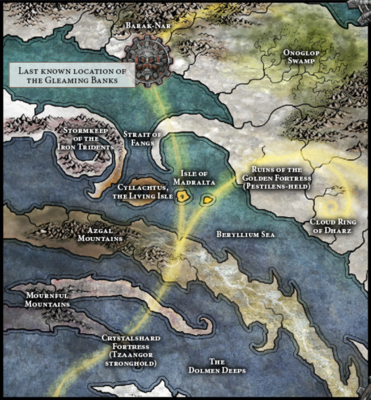 Barak-Nar sails the skies of the Realm of Chamon and in the Age of Sigmar can be found within the Gleaming Banks to the north of the Strait of Fangs and the Stormkeep of the Iron Tridents. [1b]

The City of the First Sunrise is the largest of the sky-ports and it is said that, with the potential exception of Azyrheim in High Azyr, no land city can hope to match its size.[3b] As such, it has the most delegates on the ruling council of the Kharadron Overlords, the Geldraad. They are renowned for their forward-thinking and bold initiatives – they were the first to move to establish trade with non-duardin and in doing so have established well-patrolled trade routes, guarded by Zonbeks.[1a]

They venerate Grimnir, Grungni and Valaya as ancestors of their race, but some go as far as to actually worship them, having shrines in their homes. [3c] 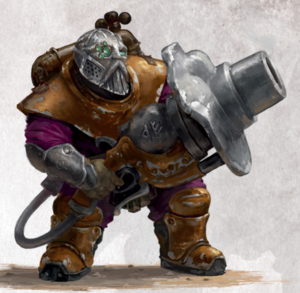